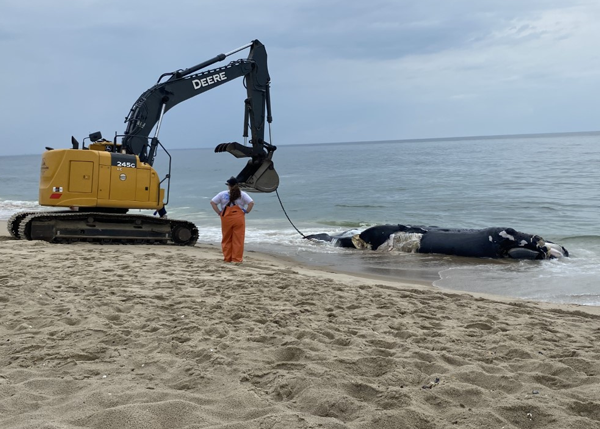 What do you do when a deceased endangered whale washes up on a Jersey Shore Beach and all 80,000 pounds of it needs to be removed and cleared? This is not only for public health reasons – but also for testing and research purposes.  That is the predicament officials found themselves in at the end of June 2020 along the Southern New Jersey coastline.

Beached whales and other dead marine mammals have posed many risks and challenges to shore communities for decades.  Across the US it has become a bit of a spectacle in the public on how such large mammals are removed from beaches.  One thing is certain (and after many viral videos) is you do not blow it up as officials from the Oregon Highway Division did in 1970.

That is where the LandMark Excavation & Site Work team came in after the Marine Mammal Stranding Center of Brigantine contacted us on Friday June 26th.  The Mission: helping them remove the dead North Atlantic Right Whale from the water and bring it to shore.  More research had to be done into the animal’s death. The research had to be sent to the National Oceanic and Atmospheric Administration.  The NOAA has been in charge of all stranded mammals along the US coastline since 1992.  It investigates about 1,200 strandings per year including porpoises, dolphins, and sharks.

This endangered North Atlantic Right Whale had been seen floating off the coast and drifting up the shoreline until it was finally located on the Saturday morning of June 27th. The animal’s new location was off the shore of Sandy Hook, NJ.  The LandMark Excavation & Site Work team went into action with a John Deere 245G LC Excavator being sent directly to the scene.  It assisted local officials and the Marine Mammal Stranding Center of Brigantine.  It carried out recovery and removal of the carcass.

LandMark’s Excavator team pulled the beached whale out of the ocean. Once the whale was fully accessible, they began the “necropsy” (autopsy for whale).  This is done to determine the cause of death.  The necropsy continued into Sunday, but it was fairly obvious that there were propeller marks on the whale and that a vessel had hit it. The whale had been divided into portions with the excavator moving it piece by piece to the grave it dug for the animal.

This whale was given the designation as North Atlantic Right whale #3560 by the NOAA.  It was 1 of 400 that are remaining in the wild. This specific whale was the first calf found last season.  It was an especially tough loss to the species and adds more of a challenge in helping them reproduce and survive.

The LandMark Excavation & Site Work team has had its share of unique jobs and opportunities. This particular mission hit close to home since it involved loss to such an endangered wildlife. The impact was also felt by our local communities that we have served for decades. The scale of the mission was a challenge for our team – we have dealt with bird nests and turtle eggs but never encountered anything of this proportion.  We were proud to help researchers analyze and humanely remove the whale from the beach.  This allowed them to learn more about the animal and hopefully prevent more tragedies like this in the future.